27-year-old Tambu Makinzi, who was suffering from chondrosarcoma, a rare form of bone cancer, has had a successful operation to remove it.

She began to suspect that something was wrong with her when she began to constantly suffer from constant headaches and weeks later, her forehead began to swell.
While the mother-of-one received treatment for the cancer, it returned earlier this year – and proved to be more life-threatening than ever.

The tumour covered her entire face, her nasal and jaw bones, displaced her left eye, and even robbed her of a sense of smell.
And after arriving for treatment in London having flown 6,000 miles from Cape Town, South Africa – doctors warned Tambu that she had just months to live.

Remarkably, Tambu was cured after surgeon Professor Iain Hutchison performed a complex operation which lasted over 35 hours.
He led a team responsible for removing 2kg of tumour, before using Tambu’s back muscle and rib to rebuild her face.

A second operation was needed to get rid of dying tissue, but she’s now on the road to recovery, and her remarkable story is set to be the subject of a Channel 5 documentary.
Tambu was finally discharged from hospital after a nine-week stay in hospital, and said she was slowly ‘getting better’.

‘I can swallow, eat foods, but it is still a bit sore.
‘And I can speak to my husband and daughter for the first time in months.
‘I miss them a lot.’

Tambu is now expected to make a full recovery – and can relish the prospect of watching her daughter Pearl grow up, alongside her husband.
Source – Metro 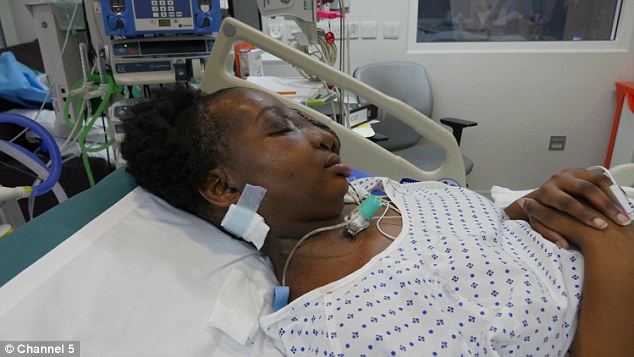 Join Our Telegram For Updates